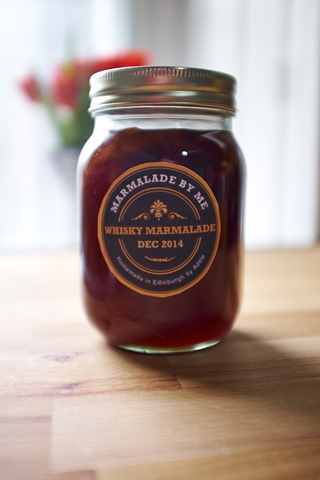 Each year I plan to make Seville Orange Marmalade, but I’m never prepared for when the short season comes round.  This year I was prepared and no Seville Oranges where to be found! So instead I made ordinary marmalade and added a generous amount of whisky, to liven it up a bit.  Marmalade making is a little more time consuming than Jam Making, as I found out.  But patience is rewarded by pots of deliciousness to spread on your toast in the mornings.

You can use whatever whisky you fancy, but bear in mind if you use an Islay Malt the marmalade will be very smoky.  I used a Jura Turas Mara which is a bit of a fruity whisky having been matured in Bourbon, Sherry, Port and French Oak Casks (what a mixture!) so it goes really well with the oranges and the sweetness of the marmalade.