Last month we were through in Glasgow and I put out on Twitter did anyone have any recommendations for places to eat.  I got several replies saying I had to try the Red Onion;  so we did.

The Red Onion is a little neighbourhood bistro just off Bath Street, so still pretty central.  We arrived late afternoon so the restaurant was quite quiet, though soon quickly filled up! We received a warm welcome and were seated at a little table by the window.  There was a lovely fire burning as well – but someone else was lucky to get that spot!

We decided to eat from their Set Menu, which had a good selection and wasn’t a bad price either. For starter I went for the Crispy Goats Cheese and Salad with Plum Tomato Chutney, the goats cheese was not too strong and was lovely and crispy with the chutney being a nice tangy accompaniment.  Stuart went for the Bang Bang Chicken Salad with Spicy Peanut Dressing which he said was very tasty and fresh and not too spicy.  He did like the noodley things on the top as well – nice presentation! 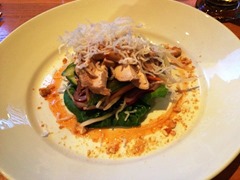 For main we both went for Steak and Frites – medium rare for him, well done for me.  Both were cooked really well, though Stuart did comment that his was a little more medium than rare – fusspot!

And finally, we did decide to go for dessert, we really didn’t need to but we did!  I went for the apple and blackberry crumble with ice cream.  It was fruity and very very tasty.  Stuart opted for the Brownie, which came warm with ice cream and it was light and chocolaty!

At £13.95 for two courses or £16.95 for three, this was great value, and I would recommend making the walk up the hill and away from the madness of Sauchiehall Street to visit The Red Onion.