The day after boxing day we took Mum and Dad out for a little drive.  We headed out of Edinburgh, across the Forth Road Bridge and followed the river all the way to Stirling, then up on towards Callender and ended up at the Lake of Menteith

We decided to have a spot of lunch at the Lake of Menteith Hotel, since old people a) like tea and b) like to eat out.  I wasn’t sure what to expect as I hadn’t heard anything about it, but the menu looked nice, and the setting was pretty too.

When we entered the Port Bar, we were shown to a table, sadly not by the window or by the roaring fire, but never mind! Mum isn’t a big eater, luckily they had a really great little persons menu and they were fine with her ordering from that (a lot of places don’t like you doing that), so she had the children’s chicken goujons which came with fries.  Dad opted for the Shepherds Pie which I believe was tasty given not a word was spoken as he frankly inhaled it! While Stuart and I had the burger (mine veggie his meat) both came with fries and both very tasty.  We rounded off with hot chocolate for the oldies and a vat of tea for me.

Afterwards we had a little walk round the grounds of the hotel which were beautiful, and probably they would have been even better if it hadn’t been misty and rainy.  It was then back in the car and back to Edinburgh, with two members of car having a wee doze after their hard day of eating and sitting! 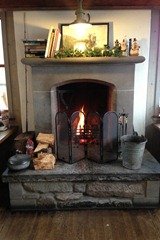