A couple of weeks ago we went on a bit of a tour of the South Coast of England, going to places we have fancied checking out but could never find the excuse to go there! This time we had one – Olympic Sailing in Weymouth!

The first stop on our tour was the Spa City of Bath.  A supposed 7 hour drive from Edinburgh (ended up nearly 10!), and not, in some parts, a very scenic journey.  We arrived at hotel at tea time, and what better way to unwind after that drive but to spend the evening at Bath Thermae Spa.

The Thermae Spa is a modern take on the old Roman Baths but still uses the same water source, the bubbling geothermal waters.   We arrived just in time for the last 2 hour session! There are 3 areas to choose from, in the basement is a large pool, with Jacuzzi and a lazy river (which I have to confess we spent a lot of time going round on like big kids!).  On the first floor, there was a large room containing 4 steam chambers, each with different scents and a waterfall shower for cooling down after.  On the roof was an outdoor pool with Jacuzzi areas and amazing views over Bath.  Unfortunately you aren’t allowed to take photos, so I have none of the beautiful sunset we seen that evening.

After splashing about for 2 hours and now looking a little prune like, we got changed and headed out to find somewhere to eat. Using our trusted FourSquare app (its served us well in many places – especially the US) we got the recommendation of Jamie’s Italian.  We tried to get a table at the one in Edinburgh the other week, but they were full, so we took this opportunity to try it out.  It was great, I had my new favourite of Stuffed Courgette Flowers for Starter, while Stuart went for the Pea Bruschetta with Smoked Mackerel.  For mains, I went for the Pasta Genovese  and Stuart the burger – both delicious and washed down with some tasty cocktails!!

The next day we visited the Roman Baths, which were fascinating – a really great museum and it was nice to see the original baths and learn a bit of the history of the baths and Roman times! We went for a walk round the city and a long the river, Bath is a really lovely place! 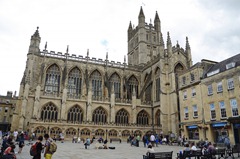 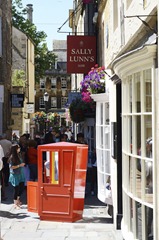 In order to prepare us for the journey onto Padstow we made a stop at Sally Lunn’s, the oldest house in Bath for their legendary Bath Buns, which were the size of my head!.  Stuart had his with smoked salmon, I couldn’t decide what to have with mine until I seen this

And Russell was right, it was very very tasty!

We had to tear ourselves away from Bath, as we had to get to Padstow – the next stop on our whirlwind tour!