When we were last in London Stuart and I made an effort to eat in places we haven’t been to before.  When you are down there working its easy to fall into the trap of the same old restaurants.  So I did my research before we went and I set my eyes on The Chop Shop at Haymarket.  It looked nice, had good reviews and of course served meat!

The Chop Shop is less than 5 minutes walk from Piccadilly Tube Station, on Haymarket so it was easy to find, we hadn’t booked but thankfully they had a table available for us in the basement, which sounds like it should be dark, but it wasn’t, it was well lit with a great atmosphere of other groups enjoying a night out.

Of course, since they had gone to the effort of putting Cocktails on the menu we had to oblige I went for a Royal Flush and Stuart had the Haymarket.  Both consumed while perusing the menu! 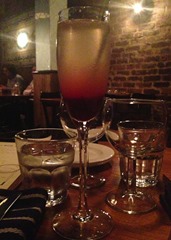 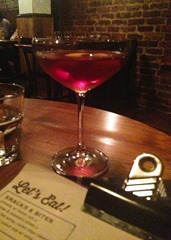 We opted not to have a starter, not because there wasn’t anything we wanted, it all looked very good, it was just we weren’t ‘that’ hungry and wanted to save ourselves for the steak! For main course I had the fillet steak with a Vodka Bacon and Peppercorn Sauce and Stuart went for the Hanger Steak with a Red Wine and Bone Marrow Sauce.  Both steaks were cooked just as we like (well done for me, still alive for him) and the sauces were served on the side which meant you could have as much as you wanted, both accompanied by a portion of tasty chips and washed down with a nice glass of Merlot!

Now of course, since there was no starter, this means there was room for dessert!  I went for the Butterscotch Custard and Stuart had the Chop Shop Brownie Sundae, again, both decent sized portions and very tasty.

After all of that we rolled up the stairs and on our merry way! If you are in the Piccadilly area and looking for something meaty to eat I can thoroughly recommend The Chop Shop. We had a great meal, the service was slow but not in a bad way, it was relaxing and you didn’t feel rushed and you could enjoy your meal.  It is now firmly on our list of places to eat for when we are in London in future!