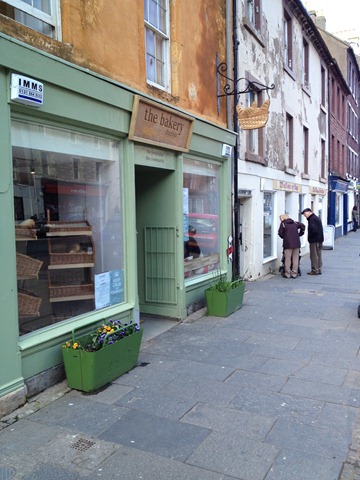 At the weekend I dragged poor Stuart half way round the country for various bits and bobs, one of the many stops we had on our travels was at Dunbar.  Some of the Edinburgh Cake Ladies have teased us on twitter with photos of the delicious cakes from The Bakery, Dunbar, so I had to stop off and try some for myself!

The shop is situated on the High Street in Dunbar, and looks inviting from the off.  When we entered I headed off in the direction of the Patisserie and Stuarts eyes were clamped on the Steak Pie!  Some focus was required and decisions had to be made about what we would get.  Even though it was only 1pm, there wasn’t a huge amount left!  So we opted for 2 Steak Pies, which were delicious, the pastry was crisp and light and the filling was very meaty.  Good spot by Stuart!

For me it was the patisserie, and it was hard to choose.  The Bakery has Ross Baxter at the helm.  Ross won Scottish Patissier of the Year in 2011, when he was working as Head Pastry Chef at Greywalls Hotel in nearby Gullane and recently joined the bakery.  The types of patisserie are not exactly what you would expect to see in a home bakery – a far cry from the cream doughnuts and pineapple creams! I went for a Opera Gateau, another little cake which I can’t remember the name off, but had like a toffee crisp base and 3 macarons! Naughty I know but I couldn’t decide and I would share you know.. well kind of!

All of these were so tasty, I secretly wish I had bought more!!! Whilst at the till paying for these delights I gave in and bought one of the lovely looking loaves of bread.  Needless to say I did choose the largest one there, which they kindly sliced for me – which means it will last longer!

The concept of a community bakery is a great idea, bringing back a proper home baking bakery into the community.  Our high streets are so filled these days with commercial bakeries, churning out precise, over produced copies of favourite tea time treats from yore, without the charm or the taste of the real deal.  I remember as a kid going to the bakery with my mum a couple of times a week to pick up fresh bread and sometimes the odd thing creamy and naughty!  But what a treat it was!

If you are passing through Dunbar, make sure you stop off, its definitely well worth it! Now just to think of another excuse to head down that way……